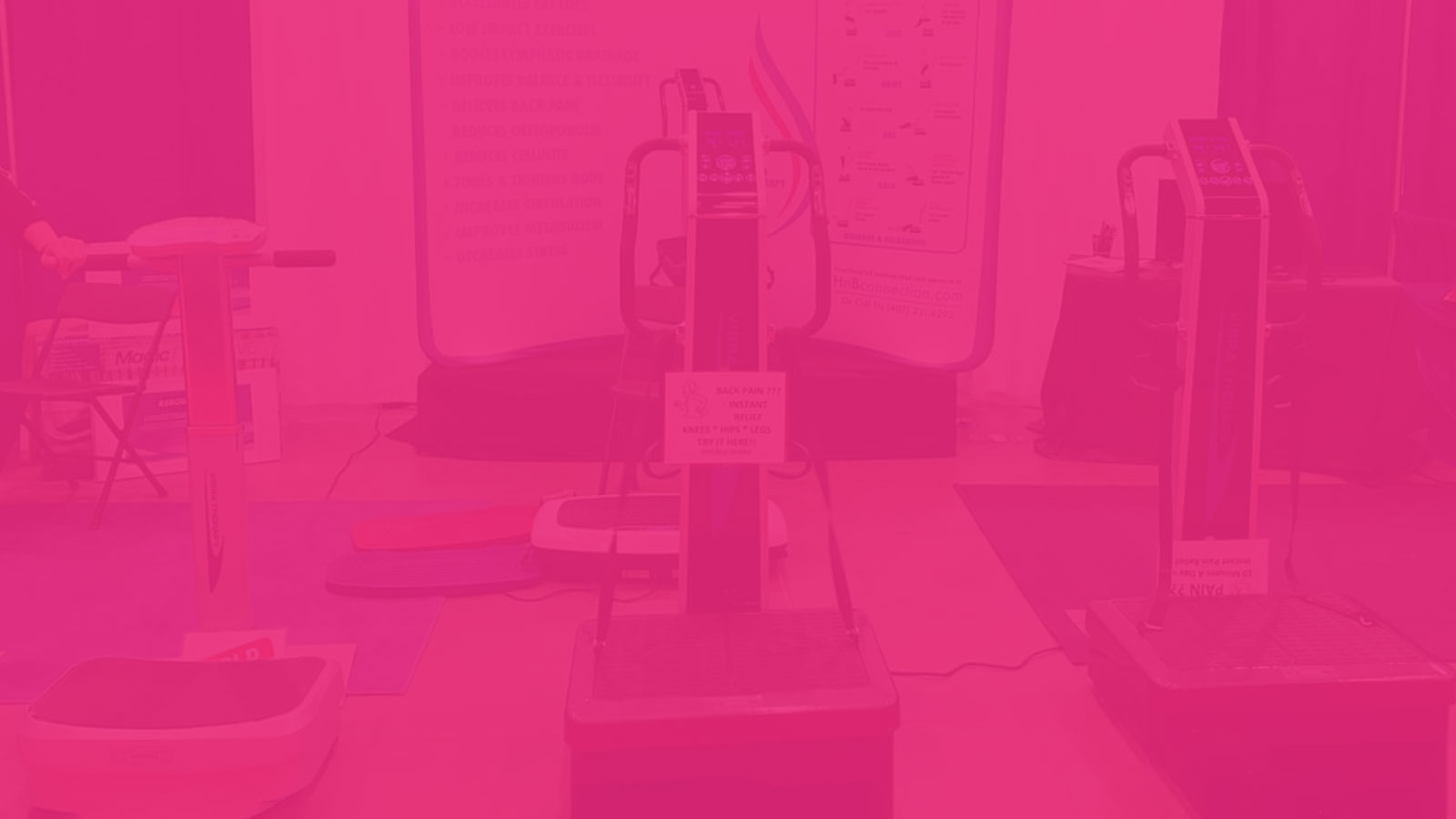 It may be popular with professional athletes and Hollywood celebrities, but WBV also has very real clinical potential for patients with neurological disorders, including Parkinson’s Disease, multiple sclerosis, stroke, and spinal cord injury.

Whole body vibration (WBV) has become increasingly popular over the last several years as a method of exercise training. As the name implies, WBV involves the application of a vibratory stimulus to the entire body, as opposed to local stimulation of specific muscle groups. This is typically performed by standing on a vibrating platform with knees slightly flexed.  In some instances, simple exercises (e.g. squats) can be performed during WBV.

WBV units typically provide their vibration by using either a rotational or vertical stimulus. With rotational vibration, the platform rotates about an anterior-posterior axis so that positioning the feet further apart results in increased amplitude of movement and applies force asynchronously to the left and right foot, similar to standing in the middle of a “teeter-totter.”(Figure 1) WBV units that provide a primarily vertical stimulus have a platform that moves vertically and symmetrically, causing simultaneous movement of the lower extremities in the same direction.1 (Figure 1) In addition to the direction of the vibration stimulus, several other training parameters are important to consider when using WBV, including frequency (Hz), amplitude (mm) and duration. Most commonly, WBV studies have used frequencies ranging from 25-50 Hz, amplitudes from 2-10 mm and total durations of 30 seconds to 10 minutes.2 Currently there is no consensus regarding the optimal parameters needed to achieve a specific physiological response.

The most common application of WBV has been to attempt to improve physical performance in athletes and younger adults by enhancing muscle activity, strength and power associated with traditional neuromuscular training.2-4 It has been hypothesized that improvements in muscle strength and power after WBV may be related to an increase in neuromuscular activation during and following WBV. Nishihira et al5 speculated that mechanical vibration elicits a myotactic stretch reflex, which is mediated by the muscle spindle and its Ia-afferents. In a recent study by Abercromby et al1, subjects performed unsupported dynamic squats while exposed to either vertical or rotational WBV at 30 Hz and 4mm of amplitude. These parameters elicited a significant increase in EMG activity during the vibration stimulus in the knee flexors and extensors as well as the ankle plantar flexors and dorsiflexors, when compared to the muscle activity seen while performing the same movement without vibration. However, it remains unclear if the enhanced muscle activation associated with WBV is primarily due to neural factors (e.g. increase in muscle spindle activation) or if biomechanical factors, such as maintaining a stable posture and dampening of mechanical energy, also play a significant role.1

Although the majority of WBV research has focused on improving physical performance in normal younger adults, there is a growing body of research on the effects of WBV in clinical populations, such as those with neurological disorders. The primary purpose of this review is to provide a summary of the current literature regarding the effects of WBV on lower extremity performance and function in individuals with neurological disorders such as Parkinson’s disease, multiple sclerosis, stroke and spinal cord injury. Additionally, practical clinical considerations and safety issues will also be discussed.  Unless specified, most of the reviewed studies required the subject to simply stand on the vibrating platform with knees slightly flexed.

Several studies have evaluated the effects of WBV in persons with Parkinson’s Disease (PD). Two studies conducted by the same group of researchers investigated the effects of a unique type of whole-body vibration on postural control and motor symptoms in persons with PD.14,15 These studies used a form of random (stochastic) low frequency (6 Hz) vibration that is distinctly different from the non-random rotational or vertical higher frequency (20-50 Hz) vibration used in most WBV research. These studies both evaluated the acute effects of WBV immediately following a series of five one-minute exposures.  One study14 reported significant improvements in postural control as determined by measuring postural sway during tandem stance; the other15 found significant improvements in the motor subscale of the Unified Parkinson’s Disease Rating Scale (UPDRS), which includes measures of tremor, rigidity, bradykinesia, gait and posture. While both of these investigations used blinded evaluators and a control group, neither used a true placebo. This could be an important point because previous Parkinson’s research has demonstrated improvement in motor function in response to placebo treatment.16 In a more recent double-blinded placebo controlled trial using similar WBV parameters, a different group of researchers found no difference in gait, balance and motor symptoms between the WBV treatment and placebo groups.17

Only one study has evaluated the effects of a long-term training intervention using WBV in persons with PD.18 This study compared the effects of 30 WBV (25 Hz, rotational) sessions (two 15-minute sessions a day, five days per week) to conventional balance training using a tilt board. Following three weeks of training, both groups demonstrated similar significant improvements in measures of balance and motor function. The benefits were retained at a four week follow-up assessment.

Multiple sclerosis (MS) is a chronic inflammatory, demyelinating disease of the central nervous system. Common symptoms include poor balance, spasticity, and motor weakness. These symptoms are especially prevalent in the lower extremities, with distal muscle groups often being more affected. Several researchers have evaluated the effects of WBV on lower extremity performance and balance in persons with MS.

In a single-blinded randomized crossover trial, Jackson et al19 measured acute changes in lower extremity muscle strength using a dynamometer following a single 30 second exposure to either 2 or 26 Hz WBV (rotational). Strength was measured at one, 10 and 20 minutes post exposure. Although strength changes were not statistically significant, there was a consistent trend of higher peak torque production for both the quadriceps and hamstrings following the 26 Hz exposure compared to 2 Hz at all time points post WBV.

Similar to some of the previously described Parkinson’s research, Schuhfried et al20 evaluated the effects of random (stochastic) low frequency vibration (2.0-4.4Hz) on postural control and function in 12 individuals with MS. In this double-blinded placebo controlled trial, subjects were evaluated using computerized posturography, the Timed Up and Go Test (TUG), and the Functional Reach Test. Subjects in the treatment group received a series of five one-minute WBV exposures and were then re-tested on all measures 15 minutes, one week and two weeks later. Results of the study showed a non-significant trend for improvement in computerized posturography scores at each of the post-test time points and a significant improvement in TUG performance at one week post exposure. Although the improvement in TUG performance was statistically significant, the change was small (1.0 sec) with questionable clinical significance.

Two studies have evaluated the acute effects of WBV on postural control and muscle performance in persons with stroke. The first study22 measured changes in postural control in 23 individuals with chronic stroke using computerized posturography following four 45-second standing exposures to 30 Hz WBV (rotational). Following WBV, there was a significant (P < 0.01) reduction in the root mean square (RMS) center-of-pressure velocity in the anterior-posterior direction when standing with eyes closed. There was also a significant (P < 0.05) increase in weight-shifting speed. Although these findings indicate possible short-term improvements in postural control, there is no evidence that changes in discreet posturography measures lead to actual reductions in fall risk or improved function in persons with stroke.

A second study23 measured acute changes in lower extremity torque production and electromyography (EMG) values in the knee flexors and extensors in acute stroke patients following six one-minute standing exposures to WBV (20 Hz). Immediately following the WBV, subjects demonstrated a significant (P < 0.05) increase in isometric and eccentric knee extension torque and EMG amplitude. There was also a significant (P < 0.05) corresponding decrease in knee flexor co-activation during the eccentric condition. However, it is unclear how long these changes may persist since the study only performed one immediate post-vibration measurement.

Just one study24 has investigated the long-term effects of a six-week WBV training intervention in persons with stroke. In this randomized controlled trial, all 53 subjects were receiving acute inpatient rehabilitation. In addition to their regular rehabilitation, half received WBV sessions (4 x 45 seconds of supported standing or sitting [depending on patient ability], five days per week at 30 Hz [rotational]) while the other half performed the same amount of a “sham” treatment of simple exercises while listening to music. Following the six-week program, both groups demonstrated increased balance and function, but there were no differences in improvement between the groups.

Only a single pilot25 study has investigated whole body vibration training in individuals with spinal cord injury (SCI). In this non-randomized trial, a group of 17 individuals with chronic (> 1 year) motor-incomplete SCI performed a vibration training program (4 x 45 seconds, three days/week for four weeks at 50 Hz [vertical]). Gait speed and characteristics were measured before and after training. The results demonstrated significant improvements in gait speed (0.062 m/s, P < 0.001) following training. These results are comparable to other forms of training that are much more time- and labor-intensive, such as body-weight supported treadmill training.26 An obvious weakness of the study is the lack of a control group. However, the promising results warrant further investigation.

As with most therapeutic modalities, WBV can be associated with risks of harmful effects when used improperly and indiscriminately. It is well known that chronic exposures to WBV in occupational settings can cause negative effects in a number a physiological systems, including musculoskeletal, digestive, vascular, reproductive, visual and vestibular.27-30 Vibration exposure can be quantified using an “estimated vibration dose value” (eVDV= 1.4αwT1/4). This value is calculated using the direction, frequency, magnitude and duration of the vibration where αw is the frequency-weighted root mean square (RMS) acceleration and T is the duration of daily vibration exposure in seconds.2 The International Organization for Standardization (ISO), which is  responsible for setting standards for occupational exposures to mechanical vibration and shock (ISO 2631-1), states that an eVDV exceeding 17 is potentially harmful. Abercromby et al2 found that vibration parameters similar to those used for therapeutic purposes (10 minutes per day at 30Hz, 4mm amplitude) exceeded ISO standards for vibration exposure.  It is important to note that ISO health guidelines focus on chronic exposures of healthy adults to daily vibration and so may have limited value for assessing risk associated with less frequent exposures in clinical populations. It is worth noting that no serious adverse events were reported in any of the reviewed studies involving subjects with neurological disorders. The most frequently cited side effect of WBV is lower extremity erythema and itching that generally tends to dissipate after several treatment sessions.31

Abercromby et al1 also compared the potential harmful effects of vertical and rotational forms of WBV. They suggested that risks associated with rotational vibration may be lower because it is easier to dampen the mechanical energy transferred to the spine and head during rotational vibration by flexing and extending the lower extremities in an alternating fashion. They also found that maintaining knee flexion angles between 26º and 30° while standing on the vibrating platform minimized head acceleration and transfer of mechanical energy to the spine.

Summary: So if you said yes to any of the above, you…

…or someone you know should start enjoying the healing affects of whole body vibration.

Despite the limitations of the current literature for persons with neurological disorders, there is a growing body of evidence in older adults and sedentary individuals that has shown a more consistent and positive response to WBV, especially when combined with simple exercises and applied in a systematic and progressive manner. This research has demonstrated improvements in lower extremity muscle strength that are comparable to traditional resistance exercise training programs.28,31-,33 This could be important for individuals with neurological disorders who can often not perform conventional strength training due to difficulty generating a voluntary muscle contraction, poor coordination and/or excessive fatigue.

Kurt Jackson,PT,PhD,GCS, is the neurology coordinator and Harold Merriman,PT,PhD,CLT is the general medicine coordinator for the Doctor of Physical Therapy Program in the Department of Health and Sports Science at the University of Dayton in Dayton, OH.